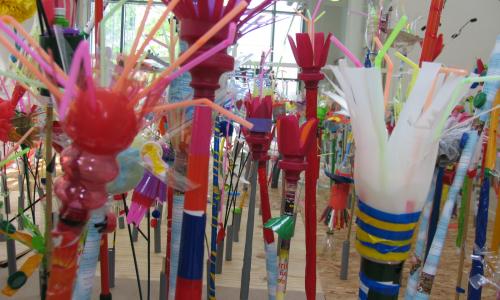 Meadow started out as a workshop for schools combining curriculum linked learning – parts of a plant – and recycling/environmental education at The National Wildflower centre.
Using plastic bottles and other throw away plastics to create beautiful and anatomically correct flowers.
The idea of creating hundreds of flowers and planting up a gallery as a meadow as an artwork/environmental message brought support from Knowsley council and the Art s Council and then from Liverpool city council and the culture company too.
Between 2005 and 2008 I worked with schools in knowsley and in liverpool and with the help of other enlisted and trained artists created meadows in huyton gallery in Knowsley and the world museum liverpool as well as running drop in workshops for events across Merseyside.
We also produced a cd and an online resource pack for schools, and a film which was distributed to all schools in Merseyside.
We won Groundwork’s environmental award in 2007 and Homes and Gardens show best Garden for the Environment Agency 2008!