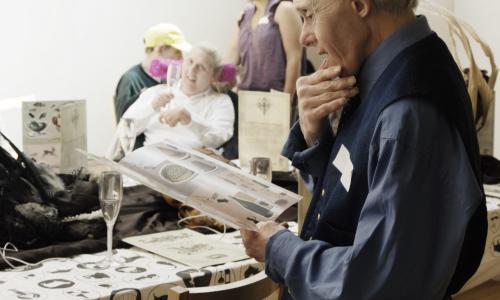 Banquet is an interactive installation based on a menu for a banquet held in St George’s Hall in 1857.
The installation includes an 18 seat dining table, scratch and sniff menus, a tablecloth printed with symbols relating to the food on the menu, tactile artwork representing the decadence of the banquet, wine glasses which you put to your ear to hear sounds of eating, drinking, corks popping, snoring, burping and worse! And an overall sound of a banquet fills the air.
Ticky worked with artists – Sally Olding Smell – Craig Yamey Symbols – Naomi Kendrick Touch – Noel Jones Sound, designer makers John Merrill and Julian Taylor and Film Maker Peter Goodwin.

All of the artists worked in consultation with the forum members to come up with interactive and multi sensory ideas which worked together perfectly.
The film which was shown alongside the installation charts the work of the forum and the workshop sessions which are the making of “Banquet”

Banquet was created as a showcase of Accessible Interpretation – made by artists in consultation with people with learning disabilities.